**I have posted this years-old tribute to Bobby by Seanna Walsh before and would like to do so again today. This day always fills me with sadness, and this is all I am going to say. 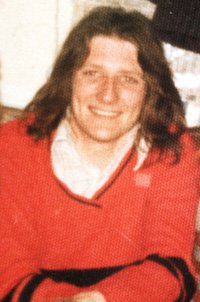 --Last Friday, 3 May, former republican POW SEANNA WALSH delivered the annual BOBBY SANDS MEMORIAL LECTURE in the fitting surrounds of the Felon's Club in West Belfast. Seanna was a close personal friend of Bobby Sands, the first of ten Irish republican prisoners who died on hunger strike in 1981, and he shared some memories of the man he knew so well.--

"I was surprised but very honoured to come here tonight and speak at this the 20th Bobby Sands lecture. Go raibh maith agaibh don choiste chuimhneacháin as an cuireadh labhairt.

We are at a crucial juncture in the current phase of the Irish struggle for a United Ireland, on the cusp of substantial electoral gains in the Southern elections,ght across Europe?

Well he was very much one of 'us', an ordinary guy who loved a bit of craic, kicked a football, had a sleg and a laugh, and lapped up the sing songs and concerts we'd organise as the guitars and mandolins were pulled out to accompany the poitín voices - we'd sing and play away into the early hours.

Bobby read and absorbed books hungrily - political and historical books about British involvement in our country and the resulting resistance to that involvement, as well as novels. He also showed an interest in the plight of 'the ordinary man' throughout the world and the struggle for social justice, fair play and freedom. This was reflected in his writings and poetry while on the blanket. In the early years he was almost like a sponge, soaking in all these different ideas, histories and theories.

As he prepared for release in early '76, he worked hard to prepare himself physically and mentally for his return to the outside and re-involvement in the republican struggle. There was no room for doubt - he was coming out to reorganise the republican base in his area, Twinbrook, and he had a picture in his head, a plan he was determined to make true.

He reorganised the army, the auxies, na Fianna and Sinn Féin, but then he took things a step further. He organised republican involvement in the tenants' associations - until then a fiefdom of the Sticks and SDLP. He pushed republicans to become involved in the everyday battles with the British Direct Rule administration and unionists on Lisburn Council. As far as he was concerned, there was so much to do and not enough time to do it.

He still found time though for his singing and playing the guitar. There was one memorable night when, in the middle of one of Bobby's cabaret sessions, an IRA foot patrol came into the local drinking club and after checking a number of peoples IDs, they approached Bobby on the stage with the intention of asking him to read out a statement from the local unit - he had written it an hour previously! Somehow the Volunteer managed to misplace the statement and had only a bru card in the pocket, Bobby took this from the Volunteer and ad libbed his way through a 15-minute speech.

After six short months, however, he was back inside and I was already there too, waiting on him coming back. The rules were different this time though, with the denial of political status after March 1976.

Bobby was at the forefront of resistance to Britain's criminalisation policies on remand in Crumlin Road Gaol and then once sentenced, in the H-Blocks. He had been involved in writing a local weekly newssheet before recapture and he decided to continue writing for it in gaol. After a while he started writing for Republican News, soon to become An Phoblacht. He was now like a man possessed; it was his job to tell the story of every brutal assault, every sadistic attack on the naked prisoners in the H-Blocks. He also opened up communication with our women comrades in Armagh Women's Gaol and those who retained political status in the Cages of Long Kesh.

The horrendous conditions in which we suffered meant nothing if the world outside of our immediate families knew nothing about them. Bobby was central to getting the word out, first of all to republicans and then to the wider community.

One effect of all this letter and article writing he was engaged in was that he developed a grá for poetry. He began to scribble bits of verse, which he would recite to the wing, interspersing it amongst his song repertoire. Nothing too heavy.

On one particular occasion, while we were in H6 in 1979, we received a collection of poems by the nationalist poet Ethna Carberry. Bobby was really taken with the maternal heartbreak of "An Páistín Fionn" and the blood-curdling tale of "Brian Boy Magee" that he set down and penned a letter. He got to the door that night after screws had left the wing and called to Brendan Hughes - 'Dorcha, get up to your door, wait till you hear this letter, it's a cracker, it's to your woman Ethna Carberry. I had to write to her after reading those poems'. The Dark replied, 'You may get your Ouija board out Bobby, she died 70 years ago!' You can imagine the slegging he got there.

As the crisis in the H-Blocks dragged on from '79 into '80 and we went through different avenues to move the British on the Political Status issue, it became clear that we would be left with one last option - The Hunger Strike.

We had talked about the final recourse to Hunger Strike since the collapse of the Cardinal Ó Fiaich negotiations with Thatcher. It seemed to us that it didn't matter what the people of Ireland thought or said, the British had but one aim and that was to smash the republican resistance both inside and out of the gaols.

People began to prepare for Hunger Strike in the summer of 1980. We had been involved in a letter-writing campaign since the formation of the National H-Block/Armagh committee in the winter of '79. This was intensified in the run-in to the Hunger Strike in October 1980. We wrote to anyone and everyone of influence in Ireland, in Britain, throughout the world. Bobby was in his element. We were not allowed to receive replies, only personal letters - one per month - were allowed, so to be honest none of us knew what impact, if any, these letters had. We do know that hundreds and hundreds poured out of each block week after week, month after month. I later found out that these tiny letters had a massive impact throughout the world, carrying our message of the horrors of the H-Blocks.

Yet somehow or another, at the end of a frenzied day of writing, visits debates and arguments with governors and warders and whoever else, Bobby used to be able to get up to his door after lights out and relate a yarn. Usually, this would be from some obscure novel he had read but the tale he spun would be like nothing less than a movie blockbuster as prisoners sat in the darkness; mattresses propped on the cell pipes, listening to some magical tale of good overcoming evil, the righteous oppressed throwing off the shackles of the oppressor.

The hunger strike of 1980, as we all know, ended with the doublespeak and bad faith that helped the British to conquer and rule half the world. Instead of letting people's heads go down, Bobby and the rest of us on the gaol leadership bent over backwards to come to some sort of comprise with the prison governors and their allies in the NIO. They were not interested. They believed, foolishly, that republicans were beaten, that they had us on the run and it was simply a case of them holding their nerve and watching the gaol protest collapsing. How stupid were they?

It became apparent to a number of us that a second hunger strike was inevitable. With Bobby leading the charge in the face of justified concerns and worries from the army leadership outside, we pressed our case. We were successful. Bobby organised for himself to be the first man on the strike, the first then to die, the two-week gap before Francie Hughes joined him giving the British space to move, to make concessions once Thatcher had her pound of flesh.

At the end of his second week on the strike, he wrote to me telling me that he had put on a fine hopeful face to those around him on the wing, to his clann on the visits. But he told me he had no intention of trying to pretend anything with me. He was determined to do what had to be done and he knew that the British would show no mercy. Yet he was confident that by his actions his comrades coming behind, and a whole generation of young still unborn, would be so inspired as to ensure that his goal, his dream, his Aisling would become a reality. The rest is history. The story of the actual Stailc Ocrais was told and retold so often last year I'm not even going to try to revisit it here.

A chairde, we have come a long way since those sad dark days of 1981. We've still got a long way to go but we're steadily making progress. During those leanest of days in the prisons we got by "one day at a time". Out here it is a battle a day too. So: