A film about the death of IRA hunger striker Bobby Sands has dominated the Irish Film and Television Awards.

Hunger took six awards at the ceremony in Dublin including best film, and best film actor for Michael Fassbender's portrayal of Bobby Sands.

Fassbender went on a medically supervised diet to portray Sands, who refused food for 66 days in a bid to be recognised as a political prisoner.

At Saturday night's awards ceremony, best supporting film actor was won by Liam Cunningham for his part in Hunger.

The film has already picked up a raft of other awards.

The film also won the Camera d'Or prize at the Cannes Film Festival last May.

Hunger, the dramatisation of the last days of IRA hunger striker Bobby Sands, has taken the top prize at the London Evening Standard Film Awards. 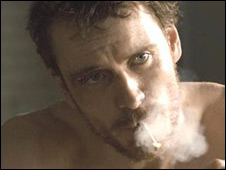 The best director award went to Stephen Daldry for The Reader, while Tilda Swinton was named best actress for her lead role in kidnap drama Julia.

Best actor was shared between Michael Sheen, for Frost/Nixon, and Pat Shortt, for playing a lonely pump attendant in Garage.

Director Joanna Hogg was named most promising newcomer for her film Unrelated while acclaimed film-maker Mike Leigh took the Alexander Walker Special Award - named after the paper's late film critic - for his contribution to British film.

Sally Hawkins, who stars in Leigh's Happy-Go-Lucky, won the Peter Sellers award for comedy, while Martin McDonagh won best screenplay for In Bruges.

Slumdog Millionaire did take one award out of its three nominations, though, as production designer Mark Digby won the technical achievement prize.

The paper's film critic Derek Malcolm said: "This year we have really seen the British film industry come of age. We are seeing British films triumphing over big-budget Hollywood epics.

"The winners of reflect the huge talent and diversity that we have in this country and the judges were delighted to have the opportunity to honour incredible quality produced both in the bigger budget films, and the smaller independent productions this year."